Home
Blog
No Justice No Peace – But I Still Have Hope

The views expressed in our content reflect individual perspectives and do not represent the official views of the Baha’i Faith.

Sadness — that was the emotional feeling that came over my body as I watched the horrific and barbaric killing of George Floyd at the hands of four Minneapolis police officers. As one of the officers had his knee on Floyd’s neck for nearly nine minutes, I was heartbroken watching and listening to Floyd beg for his life. His familiar words rang in my ears: “I can’t breathe…” the same words uttered by Eric Garner just six years ago. Then, Floyd’s body, now lifeless, stayed pinned under the officer. The officer’s knee wedged in Floyd’s neck as if his life did not matter. To the officer, he was subhuman.

“When will there be justice for my brothers and sisters who continue to be treated in this racist, inhumane way?”

As I watched, tears began to flow from my face as this man now laid lifeless on a Minnesota street. I thought, “When will there be justice for my brothers and sisters who continue to be treated in this racist, inhumane way?”

You see, according to research mapping police violence:

The statistics are a reminder of the racist system that has seen little change when it comes to law enforcement and justice — a system dating back to the chattel slavery of my ancestors in America, where “law enforcement” was at the hands of slavers. The Eurocentric perspective of history portrays the end of the Civil War in 1865 as a victory of the Emancipation Proclamation. This narrative was only a surface movement of change, of Reconstruction. Was this a truth? Or was this the rise to a new formation of the laws of slavery in the racist system known as Jim Crow? At the root of the new laws of enforcement was the creation of law enforcement agencies in America.

I find it interesting that while 1965 is often acknowledged as the end of Jim Crow laws in America, the guerilla police tactics of the time continue on today. It has been said for many years that men who used to wear the white sheets of the KKK slowly turned in those uniforms for a badge and gun. I remember my uncle sharing stories of how law enforcement in his hometown in Texas recruited its officers from the KKK. I find it interesting that the job title, “Peace Officer” is used today when referring to police officers. I just want to ask them, “For who? And do your fellow comrade blue bloods believe that my life doesn’t matter?” I hear the words in my head that I’ve heard so many times — words of protestors said all too often: “No Justice, No Peace!”

“it is no surprise to me that often when police officers see me, they grip their gun holster”

Peace is not what I feel. What I feel is fear. Fear that some white person exerting their privilege will mistakenly call the police on me when I’m living within my rights. Fear that because of my large physical stature at 6’6” I will be profiled within the racist “buck” archetype. By definition, the “buck” is a man who has a specific goal: to brutalize the white man and rape the white woman. The encoding of this archetype has continuously been perpetuated in all forms of media. And it is no surprise to me that often when police officers see me, they grip their gun holster. The hardest part of this is that I’m a law-abiding citizen that works with local police in my community on police and community relations. However, none of this matters when fear and emotions set in for the officers that do not know me.

Yet, I also feel a sense of hope — a hope that has carried black folks since 1619, a higher power. As a Baha’i, I’m encouraged and find my hope in the faith of the divine teachings of Baha’u’llah. One of my favorite quotations from these divine teachings is:

“Now is the time for steadfastness. Now is the ripe moment for the stalwart warriors and champions to show forth courage and to demonstrate their heroism in the arena of service, until such time as God will exalt His Cause, will remove the distress and anxiety of His friends and trusted servants, and glorify those who were brought low among His creatures, to make them spiritual leaders among men, and to make them God’s heirs.”

It is this guidance that gives me hope and strength to rise up and continue to do the work also defined by the Rev. Dr. Martin Luther King, Jr. when he said, “No, no, we are not satisfied, and we will not be satisfied until justice rolls down like waters and righteousness like a mighty stream.” 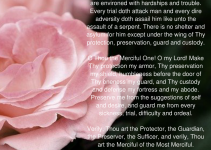 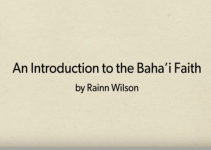